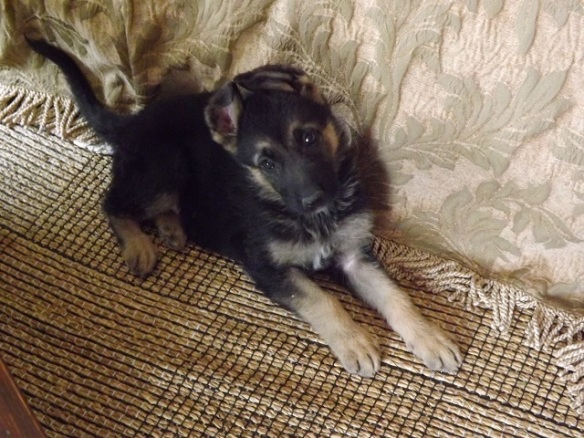 Busy Busy! A picture tells a thousand words and here I give you two.

The turbine is not yet operational; we are stymied on AC/DC and dump loaders; better slow and steady (Everything necessary runs on solar already). But it is UP and steady. Personally, I find it quite like a minimalist sculpture. And in case you are wondering, it is virtually silent even at high speed.

And She. Gorgeous She who has no name as of yet. She who came on the sag eclipse as Completion, in this case of our little tribe here. She who collects and violently shakes all shoes and socks and actually all things that fit into her mouth.  Rather like having a toddler around, the frequent and peaceful parts of the day are when she is napping.

I am a big fan of the mindhacks blog. Recently, Tom Stafford posted about sensations many of us have but don’t talk about. And what equally drew my attention was the illustration provided, what it says about human nature and how ‘valid’ knowledge becomes just that:

This points to something curious about the way we create knowledge, illustrated by a wonderful story about the scientific history of meteorites. Rocks falling from the sky were considered myths in Europe for centuries, even though stories of their fiery trails across the sky, and actual rocks, were widely, if irregularly reported. The problem was that the kind of people who saw meteorites and subsequently collected them tended to be the kind of people who worked outdoors – that is, farmers and other country folk. You can imagine the scholarly minds of the Renaissance didn’t weigh too heavily on their testimonies. Then in 1794 a meteorite shower fell on the town of Siena in Italy. Not only was Siena a town, it was a town with a university. The testimony of the townsfolk, including well-to-do church ministers and tourists, was impossible to deny and the reports written up in scholarly publications. Siena played a crucial part in the process of myth becoming fact.

Where early science required authorities and written evidence to turn myth into fact, ASRM shows that something more democratic can achieve the same result. Discussion among ordinary people on the internet provided validation that the unnamed feeling was a shared one. Suddenly many individuals who might have thought of themselves as unusual were able to recognise that they were a single group, with a common experience.

There is a blind spot in psychology for individual differences. ..Something common to all of us wants to validate our inner experience by having it recognised by other people, and in particular by the authority of science. I can’t help – almost all I know about ASMR is in this column you are reading now. For now all we have is a name, but that’s progress.

According to the articulate Kimberly Maxwell of Sher Astrology, we are living through

‘an era defining signature, just as the conjunction between these two planets (Pluto & Uranus) was in the 1960s and the last square before that in the 1930s.  It is another cyclical moment of upheaval in human evolution with the archetypal purpose to shake us, wake us and take us to the next level by forcing us to let go of the past and all that we hold near and dear.  Authenticity is the one thing that can withstand this immense pressure.  Ultimately whatever breaks down only does so because it is non-essential to the core of our Self.  Being open to change is easy to say but much, much harder to do in the face of the mountain of “learning” we’ve gone through to be a success as a human being.  Fear is definitely a culprit and is usually directed at someone or something that threatens our very existence – as we think we know it.  A great anti-fear agent is observation.  To conquer resistance to change, we could make a choice not to fight it but instead to adopt the counter-intuitive measure of simply observing it.  Where in each of our lives are we resisting change?

Emphasis in both quotes is mine.

‘Ultimately whatever breaks down only does so because it is non-essential to the core of our Self.’  That can be a tough one to reconcile with oneself. That’s going to take perseverant thought, deep thought. Let us begin – or continue on, as the case may be. There is no more important occupation than sorting through our ‘core truths’.

I suppose for many this could be taken as a relief. Surely, if we could get to ‘the other side’ of whatever it is we are gripping so tightly, it would feel like this. Perspective is everything, isn’t it?

Have a ponder on these two offerings today.

1 thought on “Addition, Subtraction and Perspective”